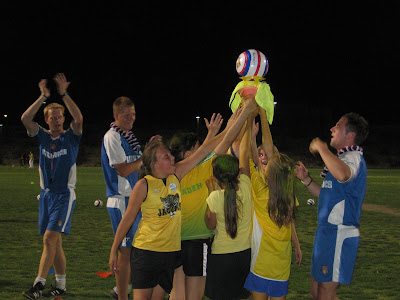 I know, I know. The World Cup is not for another three years.

All this week Ana participated in British Soccer Camp. Each group was assigned a country. They earned points by answering trivia questions, creating chants, making flags and bribing coaches. At the end of the week, the two teams with the highest points played a soccer scrimmage to determine the overall winner. Ana's team, Jamaica, won the scrimmage on the game winning goal by none other than Ana!! This was very exciting for her. Almost as exciting as her injury on Tuesday. 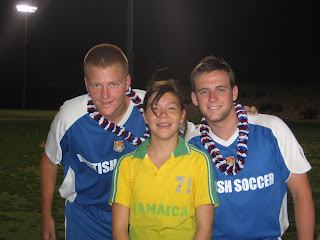 After camp on Tuesday evening, the teams did a "cone raid" where all the players race around the field gathering the cones and cleaning up equipment. Ana, graceful girl that she is, managed to trip and bang her knee HARD on the ground. The coaches at camp, in order to limit their liability, wouldn't let anyone touch her and insisted on calling 9-1-1. The paramedics arrived first and sauntered down to the field. The ambulance was not far behind but they drove down to the field. (It's quite a distance from the parking lot to this particular field as it is also used as a drainage basin in the event of flash flooding.) Ana was then transported by ambulance to St. Rose Dominican Hospital's Emergency Room. We finally got home around 12:30 in the morning on crutches with the knee immobilized. 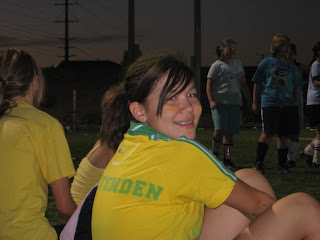 After a heart-to-heart chat at the pediatrician's office on Thursday where I informed her all that she would lose (namely: the 2007 Chun Kuk Do ITC) if she was unwilling to endure a little pain, she made a miraculous recovery. 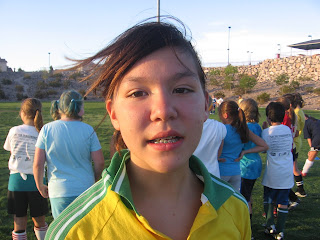 She muscled up, got through the pain and was able to participate in soccer camp by Friday night.

Labels: She's studly when it matters most

Sounds like an exciting week in Ana's life. Aren't all her weeks exciting? Glad she is OK and still having fun.

My two boys are both soccer players, as I'm sure you know. I went back to my blog - I don't know - perhaps a bit of longing and anguish that it ended. When I saw the fourth comment, I was thinking "who the heck is Karen?", and then when you wrote what you wrote, I darn near teared up. Of course, big tough Army guys don't cry, do they? In any event, I wanted to say a few things, but I'm hesitant to on a public forum. I'll start with a question:

You read all 240 posts? Wow...sorry for the profanities that came out at times.

I had begun to feel like I was some sort of lone voice in a sea of liberalistic thinking bloggers, and I just reached a point where I felt there was nothing more I could say...no hope of me getting through. So I quit...gave up...first time in my life I ever did that.

Well, thank you for reading me all this time. I'm flattered, honored, and quite astounded, actually. Your children look good, and I wish them and you the best of luck.